The load resistors, also called  load banks, are the most reliable,  popular and cheapest solution  for testing power sources. Our  resistive load banks are designed  and standardized to optimize,  technically and economically, the performances and are  manufactured using different  types of stainless steel resistor  elements The total load and  individual steps are strictly  depending to the characteristic  of the customer application.

The dummy load banks can  be used as a ballast load  during the normal operation  of a generating set. In fact the connected load to the generator  may vary over a wide range,  either as seasonal variation or  the load itself, and so when the  real demand is small it can be  useful to connect an additional  load to allow to the engine  operating at 40% of its rated  capacity to prevent dangerous  effects.

Another important application  of the load banks is the periodic  test of the diesel generator sets that should be always an  essential part of any predictive  and preventive maintenance  plan to ensure that the standby  generator sets operate in case  of power failure. Consider, for  example, the risks associated with the failure of the emergency  power unit in a hospital, an  airport, a data center, a shopping  mall or in a bank. Usually the test of a diesel engine is run with  very low or no loads making  the generator sets increasingly  unreliable and expensive to  maintain. This mode of proof  in fact generates phenomena  such as wet-stacking (the  accumulation of unburned fuel  in the exhaust system) that  lead as consequence an oil and  fuel anomalous consumption,  reduction of performance and reliability of the engine,  increment of operating costs.

*Options for mounting : fork-lift base +150, castors + 280, legs for static application + 180mm  For the stackable version (double unit) the total height is 2480 mm, including fork-lift base. 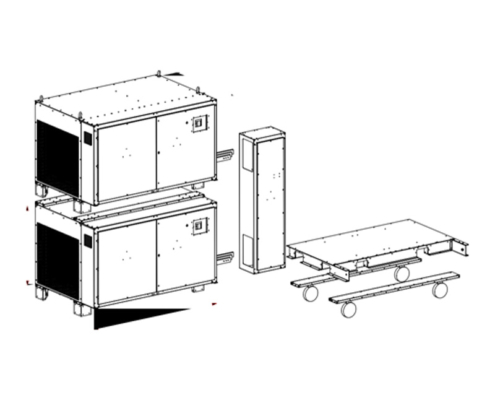